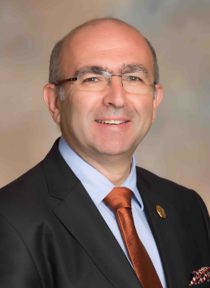 Dr. Berk was born on 19/06/1958 in Istanbul. After graduating from high school in 1977 he started medical school training at Istanbul University, Istanbul Faculty of Medicine where he had the chance to do clinical clerkships in Switzerland and Denmark on Surgery and Orthopaedics, Anaesthesiology and Immunology and allergy. 1984-1985 were the years for governmental health service for him where he worked as a general practitioner in a rural health district in Artvin.

He received a “Chef de Clinic” position at Institute Calot, Berck Sur Mer France and where he worked for one year between October 1990 and September 1991. Meeting Dr Daniel Chopin changed his professional plans and focused on spine surgery.

In 1992 he started to work in Dokuz Eylül University. It was a new city, young University and a family of three! Although it was planned for a maximum of five years stay, it evidently turned out to be a full career.

In 1995, the family Berk went to Baylor College Houston Texas for 6 months of visiting Fellowship.

He received best poster award in Eurospine Innsbruck meeting 1997 and The Scientific & Research Council of Turkey’s Technology Development award on “Spinal System” in 1997.

Leadership activities include president of Turkish Board of Orthopaedics and Traumatology (2002-2004), Representative to UEMS-Ortho 2010-2015 and appointed delegate to UEMS- Multidisciplinary Joint Committee on Spine Surgery.

He is currently the editor-in-chief  of Acta Ortopaedica et Traumatologica Turcica and regularly reviews for Spine, European Spine Journal, World Spine Journal and Journal of Bone and Joint Surgery-American.