Democracy in a Digital Society – Trust, Evidence and Public Discourse in a Changing Media Environment 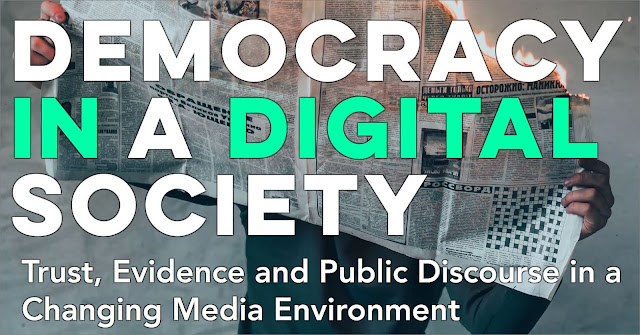 EASE was recently represented at the expert forum on “Democracy in a Digital Society – Trust, Evidence and Public Discourse in a Changing Media Environment” by Council member Sylwia Ufnalska.

The event was hosted by Re-Imagine Europa and All European Academies (ALLEA) at the Berlin-Brandenburg Academy of Sciences & Humanities, Berlin, on 24 January 2019.

The invited speakers included Valéry Giscard d’Estaing (President of Re-Imagine Europa, former President of France), Mariya Gabriel (European Commissioner for Digital Economy and Society), Baroness O’Neill of Bengarve (Co-chair of the ALLEA Working Group Truth, Trust and Expertise and former President of the British Academy), and other eminent experts. The discussions focused on the problem of fake news spreading on social media, but Sylwia Ufnalska drew attention of the audience to the problem of decreasing quality of scientific publications, which contributes to the reduced public trust in science and scientists.

As Erick García García (an EASE member) rightly put it “if we do not stop the current trend of publishing low-quality texts, in a couple of decades scientific texts will be accessible only to the super-specialists who do not need to read the text to understand the science of a particular paper.”

In order to increase public trust in science and expertise, but also broaden interdisciplinary cooperation among researchers, raise the status of European scientists, as well as promote research integrity and high-quality science translation and editing (which require expertise in both language and scientific reasoning), EASE has suggested the following actions:

• Promotion of effective and ethical scientific communication, e.g. by means of courses in scientific writing based on EASE Guidelines for Authors and Translators of Scientific Articles (especially for PhD students and older researchers who wish to improve their writing skills)
• Promotion of editorial standards for science journals (e.g. COPE Guidelines), as science journal editors are the “gatekeepers” who decide what gets published and what does not
• Exposure and condemnation of predatory journals, which commercially publish low-quality papers without peer review or editorial judgement
• Emphasis on methodological rigour and reproducibility, using editors as educators and advocators
• Freedom of choice of science translators and author’s editors by scientists for their manuscripts before submission to a journal (no obligation to issue calls for bids, etc.)
• Freedom of editorial choice to publish good science without commercial or political influence
• Reduction of the bureaucratic workload of scientists, who now waste a lot of their time on unnecessary procedures
• Continuous development of critical and analytical thinking skills during education of young people (in relation to fact checking and validity of interpretations)

EASE aims to help achieve these goals through initiatives such as:

• To update editorial recommendations for scientists and science translators (EASE Guidelines, freely available in >20 languages)
• To develop and endorse standards of science editing
• To disseminate information about best practice
• To train the trainers in scientific communication
• To advocate for greater transparency and awareness of the scientific process and publishing
• To encourage disaggregation of data by sex and/or gender (where appropriate, especially in medicine) and awareness of gender bias (SAGER Guidelines)
• To recommend experienced journal editors and author’s editors

A recording of some talks and discussions from the event is available here.