EASE > About us > History of EASE 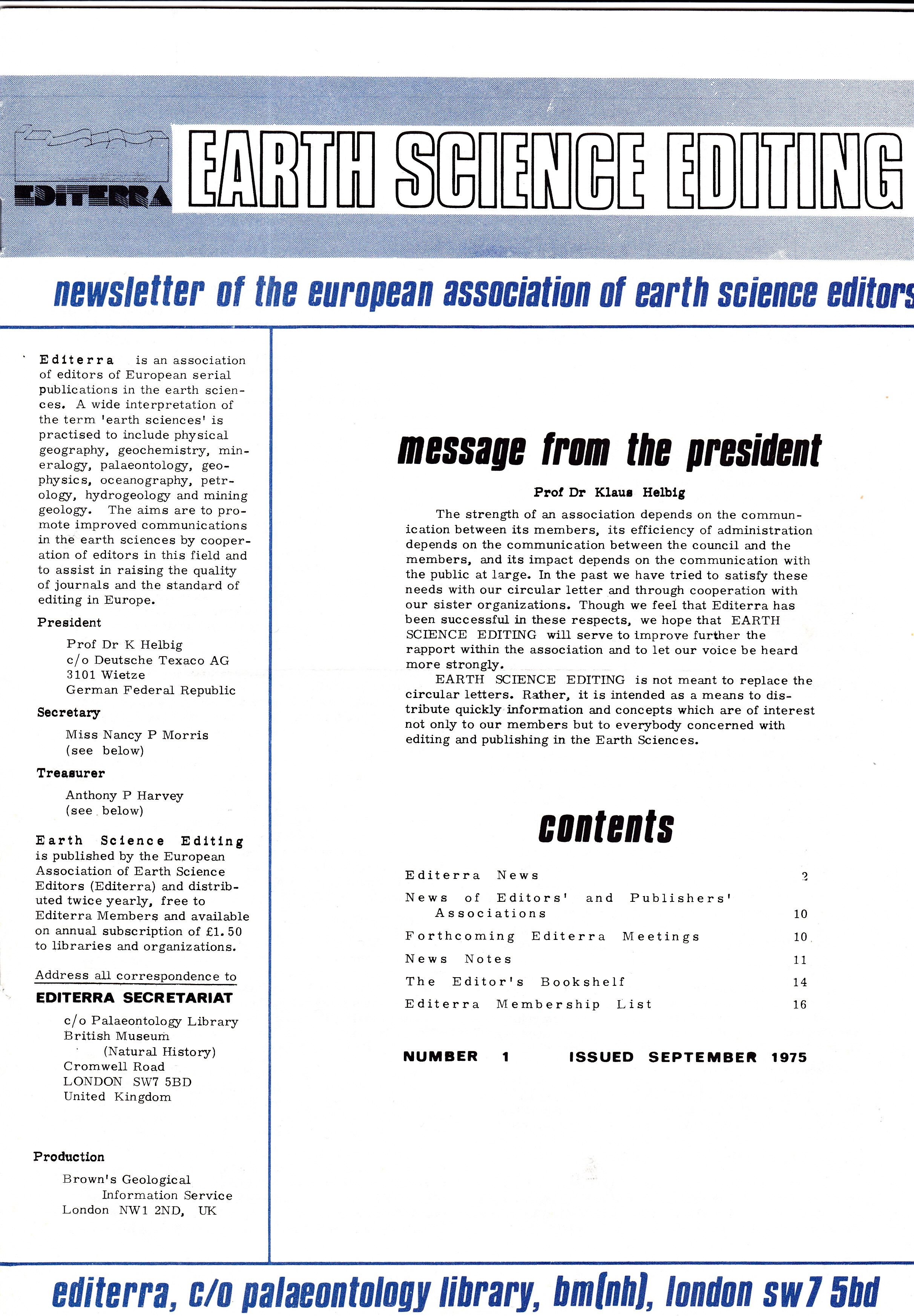 ELSE was known first by the unwieldy name “European Association of Editors of Biological Periodicals” and came into being in 1968, with encouragement from UNESCO. Luckily the name was changed to ELSE at the first General Assembly in 1970. Editerra (born 1968, also with UNESCO encouragement) and ELSE soon began to cooperate closely. The first joint meeting, a workshop on typesetting and printing, was held at the Royal Society and the London College of Printing in 1975 and was reported in Earth Science Editing No. 2 in February 1976.

Nancy Morris, Secretary of Editerra from almost the beginning, was responsible for many of the first reports of meetings that were so important in the early issues of Earth Science Editing. In 1977 she became Secretary of ELSE too. Nancy was one of the prime movers in the discussions on amalgamation. As well as reports of meetings she contributed poems to the bulletin/ newsletter between 1978 and 1983.

A detailed history of EASE has been compiled by Maeve O’Connor and may be downloaded here.

“Origins of EASE” by Maeve O’Connor with Nancy Morris’ poem can be downloaded here.

History of Editerra and its amalgamation with ELSE

Editerra was formed at a meeting held in December 1968 in Unesco House, Paris. I believe this was called by Unesco, urged by IUGS and IUBS, with the aim of establishing editors’ associations in all the sciences and regions of the world, though I have no documentary proof of this. The initial document issued by Editerra says “Despite a general lack of enthusiasm for creating new organizations, which was also noted at the constituent assembly, it soon became clear to each of the participants that an association such as Editerra could be very useful to all editors and to the sciences which they serve, Therefore the final decision was convincingly in favour of the foundation of a European association, of a similar pattern to related organizations already in existence (e.g. the American “Association of Earth Science Editors” or the “European Association of Editors of Biological Periodicals”). Following this a letter of invitation was sent to all the journals that could be found and a membership was established.

The Constituent Assembly also adopted a Constitution consisting of Statutes and Bye-Laws and appointed as officers President: Professor A. Hacquaert (Geologisch Instituut, Gent, Belgium), Secretary: A.A. Manten (Utrecht, The Netherlands), Treasurer: R. Herb (Geologisches Institut, Bern, Switzerland). Dr Manten then started issuing a series of Editerra Circular Letters, the first of which, in August 1969, dealt with a membership drive, membership fees, Statutes and Bye-laws, Resolutions adopted by the Constituent Assembly, the First General Assemby, the Council, Circular Letters, inventory of tasks, editors’ handbook, opinion polls, cooperation with AESE and EAEBP, and language. Thus the pattern of activity of Editerra was set at this very early stage.The First General Assembly was planned for Gent in December 1969, The Council in addition to the officers named above were Dr A. Martinsson (Past President), Professors S. Saxov and J. Dylik (Vice-Presidents), Professor P. Morin (Assistant Secretary), and Drs A. Marosi and A.H. Cook (Members). The membership was invited to nominate other candidates to be put to the Assembly in Gent.

I attended the First General Assembly and have been an active member ever since. This Assembly adopted a number of resolutions and also set up a large number of committees (16 committees and two working groups for individual handbook chapters).

A First Extraordinary General Meeting was held in Leiden in December 1971 and a Second General Assembly in London in September 1972.  At this Assembly there were contested elections with three proposals for President (two from the Nominations Committee), five for the two Vice-Presidents, two for Secretary and four for the two ordinary members. In the event all those elected were from the Nominations Committee list: Professor A. Martinsson (President), A.H. Simpson (Vice-President), O. Samuel (Vice-President, A.A. Manten (Secretary), R. Herb (Treasurer), C.F. Winkler Prins (Assistant Secretary) and H. Breddin and R. Delbos as ordinary Council members. Also at this Assembly a Handbook Committee was formed under the chairmanship of A.H. Simpson.

At all these early meetings, much of the time was taken up with discussions ostensibly about chapters for the Handbook but which in my view were very valuable as educational exercises for inexperienced editors who could learn a lot without having to go to “training” sessions. This period was also marked by long silences from the Secretary followed by sudden bursts of activity.

The Third General Assembly was held in Lammi, Finland in April 1975, where the Nominating Committee’s slate of proposed officers was elected without any others being proposed: K. Helbig (President), K. Clayton and R. Delbos (Vice-Presidents), Nancy P. Morris (Secretary) and A.P. Harvey (Treasurer). Of the four persons nominated for the three ordinary members of Council, one had declined to accept nomination so the other three were elected without a ballot: A.A. Manten, A.H. Simpson and P. Fogelberg. New Statutes and Bye-Laws were put forward and with a few small amendments were accepted. At this meeting I was also appointed as Secretary to the Handbook Committee and the format of the Handbook was discussed, It was agreed that sections should be issued as they became available and Tony Harvey agreed to investigate the most convenient type of loose-leaf binder.  My position was subsequently changed by the Council to Editor of the Handbook and I was put on the Council ex officio.

In the autumn of 1975 the first issue of Earth Science Editing was published. In his opening message the President said “In the past we have tried to satisfy these needs [to communicate with members] with our circular letter and through our cooperation with our sister organizations. Though we feel that Editerra has been successful in these respects, we hope that EARTH SCIENCE EDITING will serve to improve further the rapport within the association and to let our voice be heard more strongly”. Thus although the circular letters continued, the report of the Lammi Assembly was included in Earth Science Editing. The third issue in July 1976 included the report on the General Assembly of ELSE held in Paris in May of that year. The Editorial also said “Editerra was well represented and cooperation between the two Associations is now very close. This is essential if individuality is to be retained and duplication of activities avoided.” The same Editorial also announced that “the first four sections of the Editors’ Handbook will be distributed shortly in a looseleaf binder”, and indeed they were issued early in 1977.

Meanwhile in December 1976 a Circular letter had announced that the amalgamation of the Editerra Newsletter with ELSE was being considered, to produce Earth Science Editing. In fact the fourth issue was entitled Earth & Life Science Editing. Clearly the two Associations were growing together and the Fourth General Assembly held in Detmold, Germany, was announced as a joint meeting with ELSE. At it a Bye-Law was waived to allow future general assemblies of Editerra and ELSE to be held simultaneously and members were encouraged to attend the Fourth General Assembly of ELSE in Budapest in April 1979.

Preparations for the Pau meeting

Originally planned for Frascati in Italy, the joint Fifth General Assemblies of ELSE and Editerra took place at Pau in France in May 1982. Before this took place, the two Associations had discussed the possibility of merging. At a Council meeting of Editerra in March 1981 it was stated that “if the present trend continued Editerra might soon become inviable” and, in view of the already close ties with ELSE and the proliferation of international organizations, it might strengthen both organizations if they amalgamated. Some members of the Council were in favour of including other disciplines and thereby establishing a European Association of Scientific Editors.

After further discussion it was decided to propose to ELSE that the two associations should amalgamate in a way that made provision for expansion in the future, and a document was prepared to put these proposals to the ELSE Council in April. This suggested the formation of a joint working party comprising the two Presidents, two members from each Council, and the joint Secretary, to work out the details of such an amalgamation, and to draft a communication to submit to the members if ELSE and Editerra. It further suggested that the first President should be a member of ELSE, with a Vice-President from Editerra, and that the retiring Presidents be members of the joint Council.

At the next Council meeting in October 1981 it was reported that the ELSE Council had not been unanimously in favour of the proposal to amalgamate but had agreed to the setting up of a joint working group to meet later that month, consisting of Professor Saxov, John Glen and Tony Harvey for Editerra and Dr Schützsack, Aart Rutgers and Maeve O’Connor for ELSE. with Nancy Morrris as joint Secretary. The meeting also received a paper drawn up by the Secretary listing points in favour of amalgamation and suggestions for procedure should amalgamation be recommended. As a result a circular had been sent out to the membership in the autumn of 1981 which resulted in overwhelming support for the amalgamation, and strong support for not limiting the scope of the new Association to just earth and biological sciences. The editorial in Earth & Life Science Editing No. 18 lists no fewer than 15 suggestions for the name of the new Association! Most of the discussion centred around whether the amalgamated association should be limited to earth and biological sciences or be framed in such a way as to include editors from any scientific discipline.

Thus EASE was born. I think the main reasons for Editerra in forming it were financial and a general feeling that most of what we did was not specific to earth sciences so that doing it separately from ELSE was inefficient. From the ELSE side I suspect these reasons were enhanced by a feeling that the medical journals were becoming dominant both because of their number and because of their relative wealth, meaning that they could more easily finance attendance at meetings, and that an influx of scientific editors from other backgrounds would reduce this dominance. 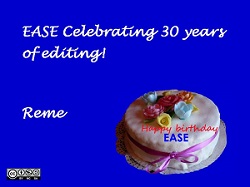 An Interview with Honorary EASE member, Maeve O’Connor, was published in the April 2020 edition of the EASE Digest. Read the full text here.